This paragraph didn’t make it onto some of the places I auto-post so I’ll add it here.

This is the end of the catamaran trip from yesterday:

Something new – just as we got back to the Careenage, the captain/crew started playing this and most everyone danced their way into port.  What fun!

I usually try to keep a list of books I’ve read on trips.  One thing I like about coming here to Barbados is that they have a book exchange and I can often pick up British books I might not be able to get in the states. Anne Perry was one of those authors I discovered here.

When I first got here I was reading

That’s a pleasant enough book but I don’t know if I’ll finish it or not.  I just don’t really care enough about the plot or the characters.  If there’s ever a moment when I’m somehow bookless, I might finish it.

On Tuesday, August 28, I had set up an auto-delivery to my Kindle of

I love the Gamache series. I discovered these books either last year or the year before here and have read the whole series.  The characters are interesting and the plots are fascinating.  They take place in Canada, which I find interesting.

At the end of the Gamache book was a note “…if you liked this book, you might like…”

I usually read British novels from the 19th century and this was contemporary but I really enjoyed it, anyway. Loved the main characters and I hope the author, Emma Jameson, writes more in this series.

So then I read

I finished that this morning and started this

And that about wraps up this trip, I think…

Posted by cushie at 7:47 PM No comments:

I haven’t made very many blog posts this time around because we haven’t done much except read, work, nap and a few dips into the pool.

Yesterday, we went out on a catamaran, though – the Cool Runnings III.

They picked us up at 8:15 am.  We were on time for once, but still the third of 3 couples going from The Crane.  We didn’t make any more pickups.  WooHoo!

So, we set off from the Careenage. This is an inlet into Bridgetown where several ships, boats and catamarans make berth. The “bridge” in Bridgetown is over the Careenage. There are two bridges now. The original is now a foot bridge with the newer, wider one for vehicles.

On any of these ships, they have an open bar and start off with yummy banana bread for a morning snack. After they clear the Careenage, they put up the sails and we’re off. 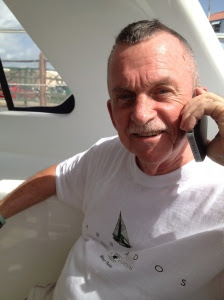 Tom on mobile – of course!

Our first stop of the morning was Payne’s Bay where Tom swam with the giant sea turtles.  A woman taking pictures was talking kind of snootily to someone that “In Hawaii they gave them flippers…”  I barged in and told her that they couldn’t have flippers at this stop because of the turtles but they would have them at the next.  ”So?!?”  I told her the turtles were an endangered species and didn’t like being kicked in the head with flippers.  Sheesh! 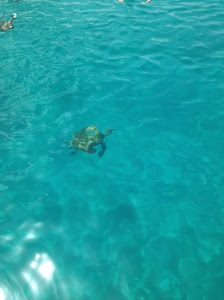 The second stop was Folkstone Marine Park. All these ships stop there because it’s home to a sunken barge. This creates a home for lots of marine life. I’m not very good at recognizing fish but I always know when I see a school of sergeant major fish. 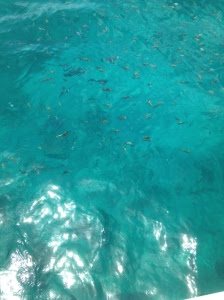 School of fish, taken from the deck of Cool Runnings III

Our last stop was a swimming stop off Alley’s beach. During this stop, we had a typical Bajan tourist lunch. The main dishes in this are flying fish, barbecue chicken, peas’n'rice, green salad, potato salad, a lo-mein sort of dish and rolls. Sometimes a sweet coleslaw, macaroni pie or beef stew is added but not today. Today’s dessert was carrot cake with cream cheese. Just like at home!

I didn’t get in the water this time but that’s ok – I just love being on the boat.

Back home and into the pool.

The next post will be the one where I list what I’ve been reading on this trip.  It will be fewer books since I’ve been working more than usual…

Posted by cushie at 8:46 AM No comments:

It was Wednesday and we had breakfast at L'Azure, one of the restaurants here at The Crane.  I told Tom I couldn't take much more of staying in the penthouse.  I felt like it was too big, I wasn't really here, that it was isolating being so far away from everything, that I felt like I was watching the pool area on a TV.

So, after breakfast, we packed our stuff and moved to our "home" - 211.  It just feels so right to be here.

There was no one in 211B so the connecting door was left open.  We actually own this apartment, too, but usually put it in the rental pool.

The year that my dear friend, Sue (SuziQ to Cushies), was here, she stayed in this apartment and used the garden a lot to think about things.  She was going to come back with us the next year, too, but she died first :(  I still miss her so much.  I'm writing this in "Sue's garden" and remembering how special she was.

So, we've been going about our daily business, working mostly, a bit of reading, time by the little pool, a few naps scattered here and there...

Posted by cushie at 5:21 AM No comments: